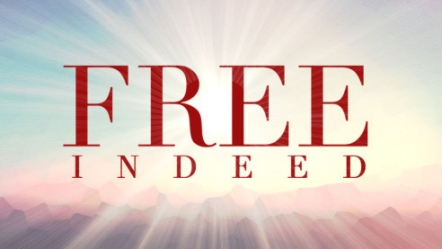 John 8:36 If the Son therefore shall make you free, ye shall be free indeed.

Freedom is one of the most difficult things to describe. It may however be better understand from an opposite perspective. Perhaps we can grasp freedom much better by first explaining its opposite- slavery.

Nothing reduces a man more than slavery. Nothing has the capacity to debase a man as much as slavery. Slavery takes away the pride of a man. Slavery takes away all of his dignity. When a man becomes a slave, his right; even to life is withdrawn. He is counted as one of the belongings of another man. It is my prayer today that as many as are under the despotic reign of Lucifer would be made free today by the power in the name of Jesus.

Slavery limits the capacity of a man to think straight. Let me remind you of the sad story of the prodigal son (Luk 15: 11-32). He had left his father’s house with a lot of possessions and had wasted all of his inheritance. He fell into slavery by his own very design. He lived among pigs like one who had no people. It was so bad that he had to eat from the crumbs of the pigs. When a man is enslaved, he is treated as the equivalent or even worse than an animal.
I remember the pathetic story of the children of Israel also. They had been in the land of captivity for over four hundred years and the children of glory were now so used to the low-life of servitude in Egypt. They had seen the miracles performed by the hand of God through Moses and Aaron forcing the hand of Pharaoh to let them go. They had seen the outstretched arm of God. So it was surprising when it so happened that on the day that God parted the sea they wanted almost to go back to Egypt. “Was it because there were no graves in Egypt that you have taken us away to die in the wilderness? What have you done to us, bringing us out of Egypt...it would have been better for us to serve the Egyptians than to die in the wilderness.” (Ex 14: 11-12). Can you even imagine that? The children of Israel actually said it would have been better for them to continue in slavery that to embark on this journey of freedom!
It tells me one thing: slavery rewires the thinking of men. It is my prayer that as many who have now settled for the low-life of slavery instead of the abundant life of freedom, God of Heaven will break the yoke upon their heads in Jesus name.

Dear friend, freedom opens the eyes of men. Paul speaking to the Ephesian Church in Eph 1:18 says “the eyes of your understanding being enlightened; that you may know what is the hope of His calling, what are the riches of the glory of His inheritance in the saints,.” To be candid, freedom starts with knowledge.
The same Paul spoke yet again in Phil 3:10-14 “That I may know him, and the power of his resurrection, and the fellowship of his sufferings, being made conformable unto his death. If by any means I might attain unto the resurrection of the dead. Not as though I had already attained, either were already perfect: but I follow after, if that I may apprehend that for which also I am apprehended of Christ Jesus. Brethren, I count not myself to have apprehended: but this one thing I do, forgetting those things which are behind, and reaching forth unto those things which are before,”
Even Paul only found freedom and self-actualization in knowing and daily following Christ. If there is one advice that I consider necessary to give you today it would be that you find Jesus with all of your strength. Lay hold on him when you contact his revelation and ensure by all means that you never let him go.

Freedom is not a reckless life lacking of accountability. Freedom is; knowing Jesus and following Him for the actualization of the full potentials of your life. That is the cross to which I call you today. That is the gainful enterprise to which I invite you to dedicate the remaining of your life.

Then Jesus said to his disciples, "Whoever wants to be my disciple must deny themselves and take up their cross and follow me. For whoever wants to save their life will lose it, but whoever loses their life for me will find it.” ( Matt 16:24-25) Now, this is the mystery of freedom. Those who seek genuinely liberating freedom must learn that there is a price to it. That price is absolute and sheepish obedience to Jesus. When you lose yourself to Jesus you find yourself in purpose. When you become a slave to his will you find the freedom to live the abundant life he promised.