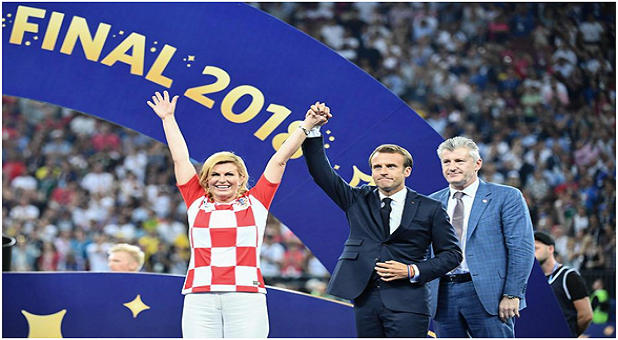 Russia 2018 has come and gone. I watched both as a football fan and entrepreneur. Here are a few lessons that I learned from this tournament and I belief they are relevant to your life and business:

1. Talent without character will ruin any man: Croatian striker Nikolai Kalinic is one of only two strikers taken to the world cup by Croatia. He refused to play as sub in the opening match of Croatia against Nigeria when he was brought in the 85th minute because he felt he was better than being a substitute. Next day, he was sent back home by Coach Zlatko Dalic. Few nights ago, his teammates reached the country's first ever world cup final, while Kalinic missed what could well have been the most historic moment of his career and life.

2. Being Favourites Isn't Enough: Your game has to live up to the tag. As in the market place so it is in football, performance has to justify being a ?favourite?, else you will get knocked out. Teams like Germany, Spain, Argentina, and Brazil found out the hard way that old glory is never enough to win games. Germany faltered because Joachim L?w used the same tactics from years past, and the team was largely complacent in its approach. If you will do well in business or career you just must keep re-inventing yourself, searching for new talents and aspiring to new heights. If you are in sales meeting, target in a month is never good enough, you must be that person who ALWAYS meets targets. That's what retain you as favourite. As they say: you are only as good as your last game.

3. Defence Is A Potent Weapon: What underdogs Russia showed against Spain was that if you can defend your goalposts well, then you can withstand losses even if you lack the ability to persistently attack. As Russia did, much to the delight of 78,000 fans in the stadium. A strong goalkeeper took them through to the quarter-finals at the expense of one of the tournament favourites. Any brand that will ultimately succeed big or small must first learn how to retain customers. The reason why most startups fail is the inability to have first-time buyers come back. First-time purchases are good but what is more important is repeat sale. The number one rule of success is defend your lead. That lead can be your best talents or your good customers or even your market share.

4. Teams Win, Not Star Talents : Teams like Argentina and Portugal suffered because of their over-dependence on Lionel Messi and Cristiano Ronaldo. Once they were stifled, the teams lost their way. Don?t build your organization all around yourself or any single talent. It's a recipe for failure. Give ownership to other staffs. Spread responsibilities. There's always tendency to over-rely on a start talent that always delivers but then you'd be setting yourself up for a single-point-of-failure. The little input of everyone is the real magic wand. It is often the winning edge.

5. To win in life, you need one more player off-the-pitch- Croatia had a twelfth player off the pitch. France had a 12th player off the pitch. For the two teams that got to the final, the Presidents of both countries were particularly interested in the game giving them all the moral support in the worldcup. Even for Russia Vladimir Putin was a big inspiration from off the pitch. The Croatian President Kolinda Grabar-Kitarovi? was all shades of amazing. Your off-the-pitch player may be your wife/husband, your children, your mentor or mum. They are individuals who have vested interest in your life and success. Their inspiration is fuel to go on and encouragement in the face of failure. When you remember such person(s) on the pitch you only think about winning.